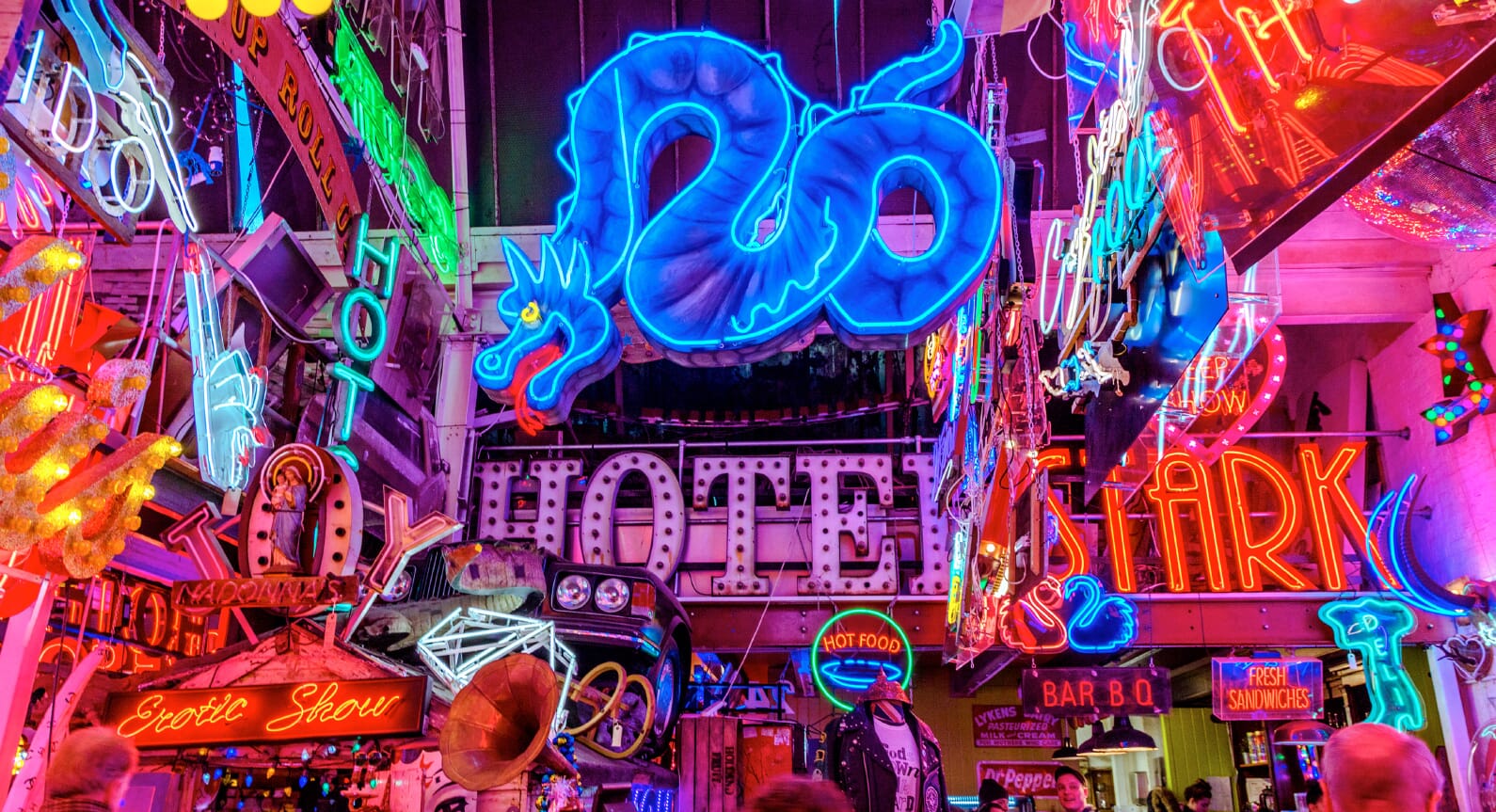 “There is a never a rainy day inside here.”

The best kept secret in London lies tucked away in an industrial estate 10-minutes from Walthamstow Station. God’s Own Junkyard, as it is aptly named, is a shrine to the art of neon sign-making; and features an array of original and vintage designs from the course of modern history.

If you think that neon art is somewhat brash, intrusive or even a little bit crude, you would be wrong. For one, you only have to walk through London’s Soho to soak up its distinguishable neon landscape and to appreciate its charm. Or, you only have to turn to the silver screen to watch cult classics such as The Dark Night and Captain America  to witness the exotic and enchanting appeal of neon typography.

And you have Chris Bracey to thank for that. A graphic designer who joined his father’s neon company in the 1970’s and started to produce custom signs for the plethora of sex shops in Soho. Sadly, Chris died in late 2014. Son, Marcus, who guided us around God’s Own Junkyard, now runs the business. And he is looking to stretch the brand to heights and invariably sights that have never been seen before. 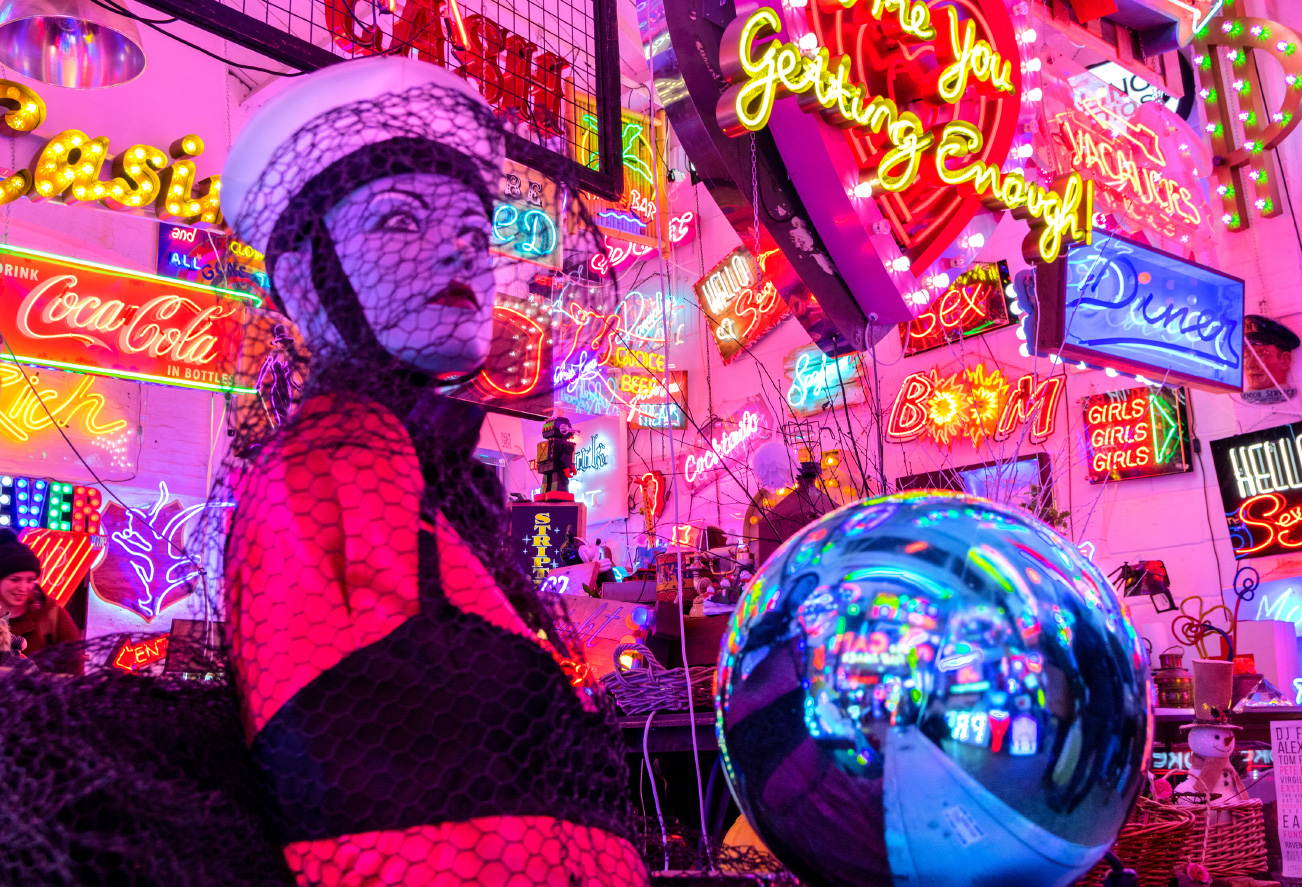 “Since my Dad really took on the business it’s grown and evolved so much. It opened up a whole new world through the use of neon in films, advertising, window displays and simply as art pieces in their own right,” explains Marcus.

Following in the footsteps of the ‘godfather of neon’ is a hard task. Yet Marcus’ passion and exuberance for the art is so infectious it’s almost tangible. So its clear to see why God’s Own Junkyard remains so successful. “I’ve always worked with my Dad, as a small kid, probably around twelve years old, venturing around the sex shops of Soho to build, fix and commission new light displays," recollects Marcus. And after a brief moment of contemplation and the appearance of a rye smile, he adds, "It was an experience being so young, let’s put it that way. But one that I’ll never forget.”

And it’s no doubt hard to forget. The visual reminders of his dad’s work are everywhere and they remain close to his heart –  as Marcus beckons me to observe the special neon piece that his Dad created for his 40th birthday. A ‘Luxury Addiction’ sign built with neon bulbs and mounted with crown jewels that “hangs proudly” towards the back of ‘Europe’s largest stock of neon signs’. 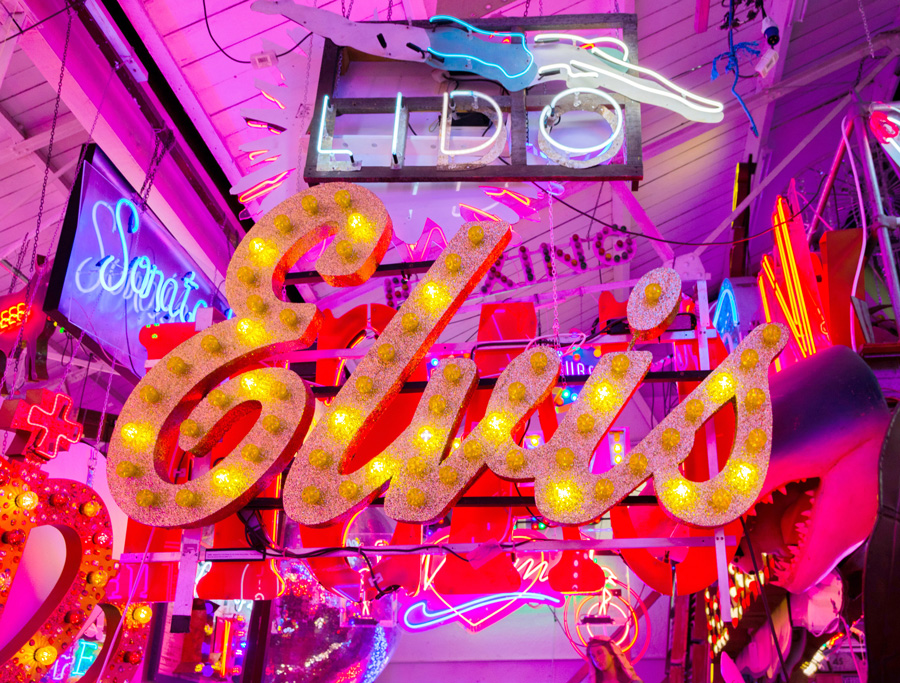 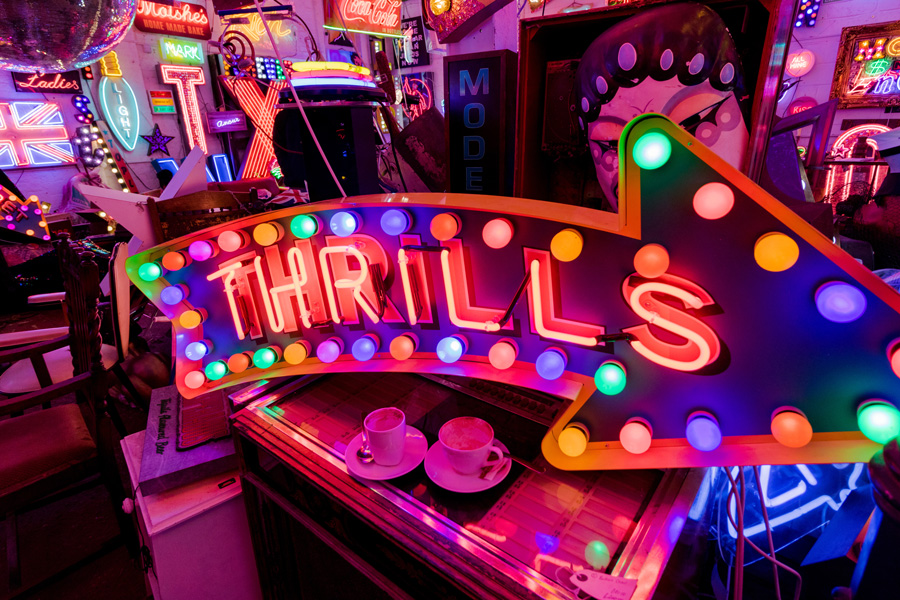 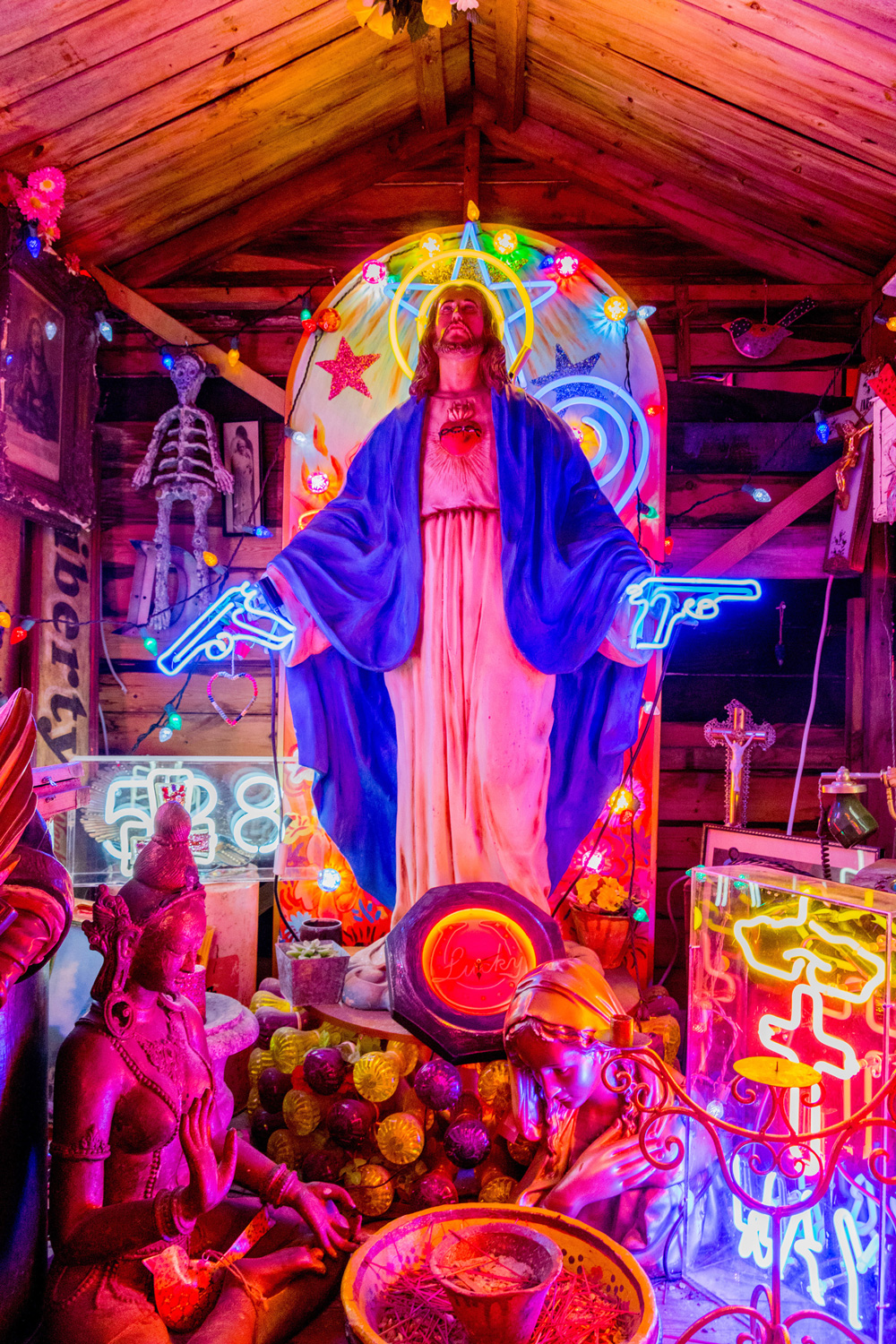 Whether it is through a fleeting glance or a glimmer of light, there is always something new to catch the eye when walking around the warehouse. Which goes someway to explaining Marcus’ excitable and enthusiastic tales behind every piece of art that we quite literally stumble across. It is of no surprise that such passion prompted the bright lights of Hollywood to come knocking on the Bracey’s family door in the 1980’s. Since then, the family has worked with a range of filmmakers such as Stanley Kubrick, Tim Burton and Christopher Nolan, on films including Eyes Wide Shut, The Dark Knight and Captain America: The First Avenger. And they can all be seen on display in God’s Own Junkyard today.

“We were working on the set of the Stanley Kubrick film, Eyes Wide Shut, putting up all the lights and maintaining them. Then, suddenly, they needed someone who could drive the big-fucking-American taxi to do the scene with Tom Cruise – and they knew I could drive so I was in. It was hard work, mind, filming backwards and forwards driving Tom Cruise up and down all day!”

But it’s not just films that the Bracey family have made their own. Among the eclectic collections of music paraphernalia, vintage designs and even their very own shrine to Jesus, there’s also British neon flags from a Kate Moss campaign and large British hearts from a window display Marcus dressed with iconic fashion designer, Alexander McQueen. 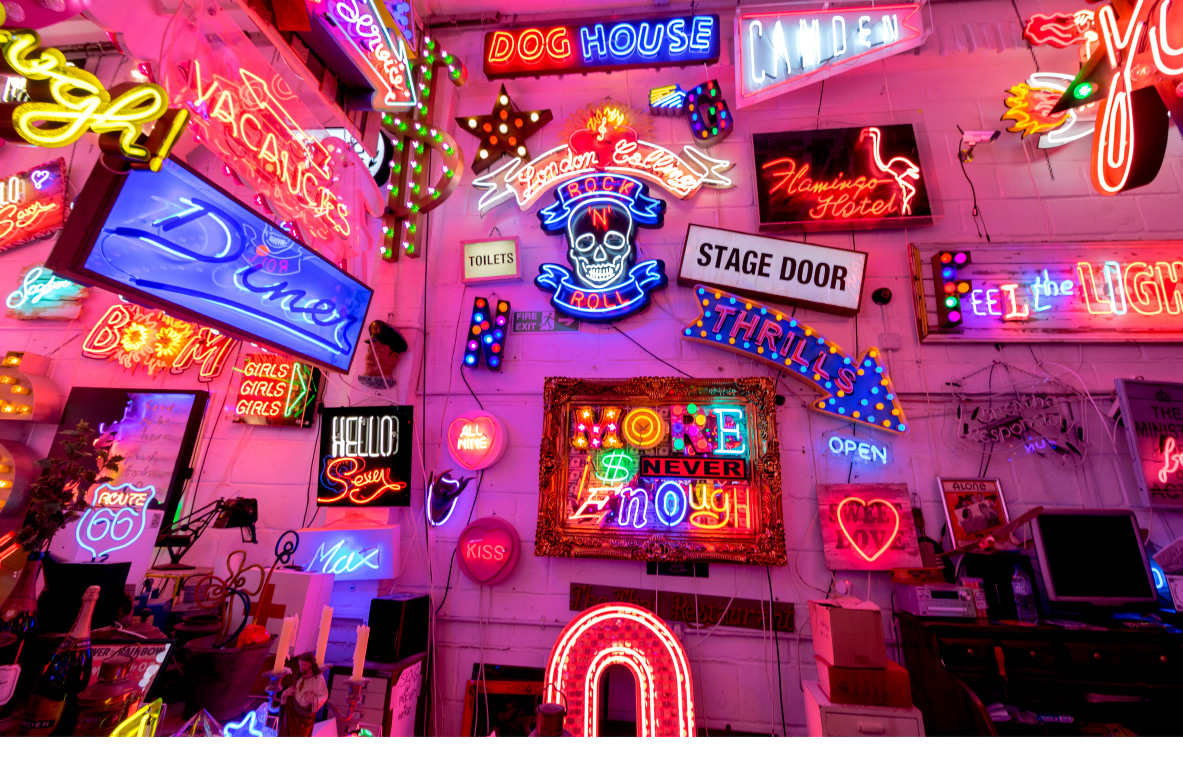 Where neon was previously denounced due to its “seedy reputation” Marcus acknowledges that it has now all changed. Thankfully, those looking for a piece of neon of their own, can find it as most of the signage on display at God’s Own Junkyard is for sale. Smaller pieces range from £250-£500 while the bigger thrills reach up to £5000 plus.

“LED’s threatened neon and that’s why neon largely went out of fashion in the 90s. But its very much back, and that’s a great thing,” lauds Marcus. “Neon is strangely addictive. We believe it has a spirit that warms you, inspires you. It’s exciting, enchanting and interesting.”

“It makes coming into work everyday a joy. Walking around and watching people enjoy the displays with the same look on the face as I feel. That makes it worthwhile, seeing people enjoying it as much as me.”

Thankfully, you can enjoy it too. God’s Own Junkyard is open to the public on Fridays, Saturdays and Sundays.