The Skateroom x Jean-Michel Basquiat Collection Has Just Got Bigger 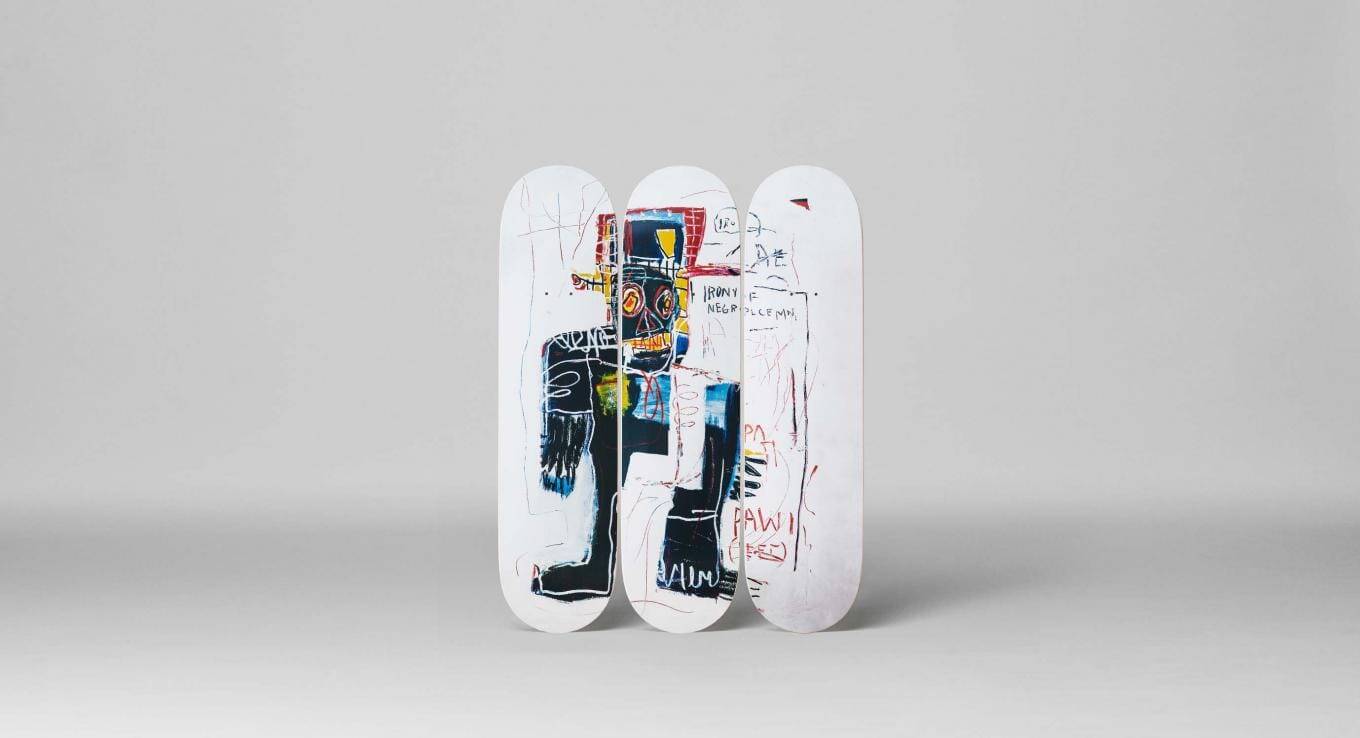 When it comes to collecting art, already an exclusive and competitive world, few artists’ work is as desirable as Jean-Michel Basquiat. The Brooklyn artist began his career as a graffiti artist in a duo called SAMO. When the people of Brooklyn began to notice SAMO’s mysterious sentences around the neighbourhood, curiosity was sparked. Fast-forward 10 years and Basquiat was a leading name in the international art world. His style developed but maintained its focus on social commentary, primarily attacking long-standing systems of racism. His tragically short but meaningful career saw many invaluable works produced, the most recent sale totting up to a healthy $110.5 million. Luckily, you don’t have to drop that much to bring a piece of Basquiat’s art into your home thanks to The Skateroom. 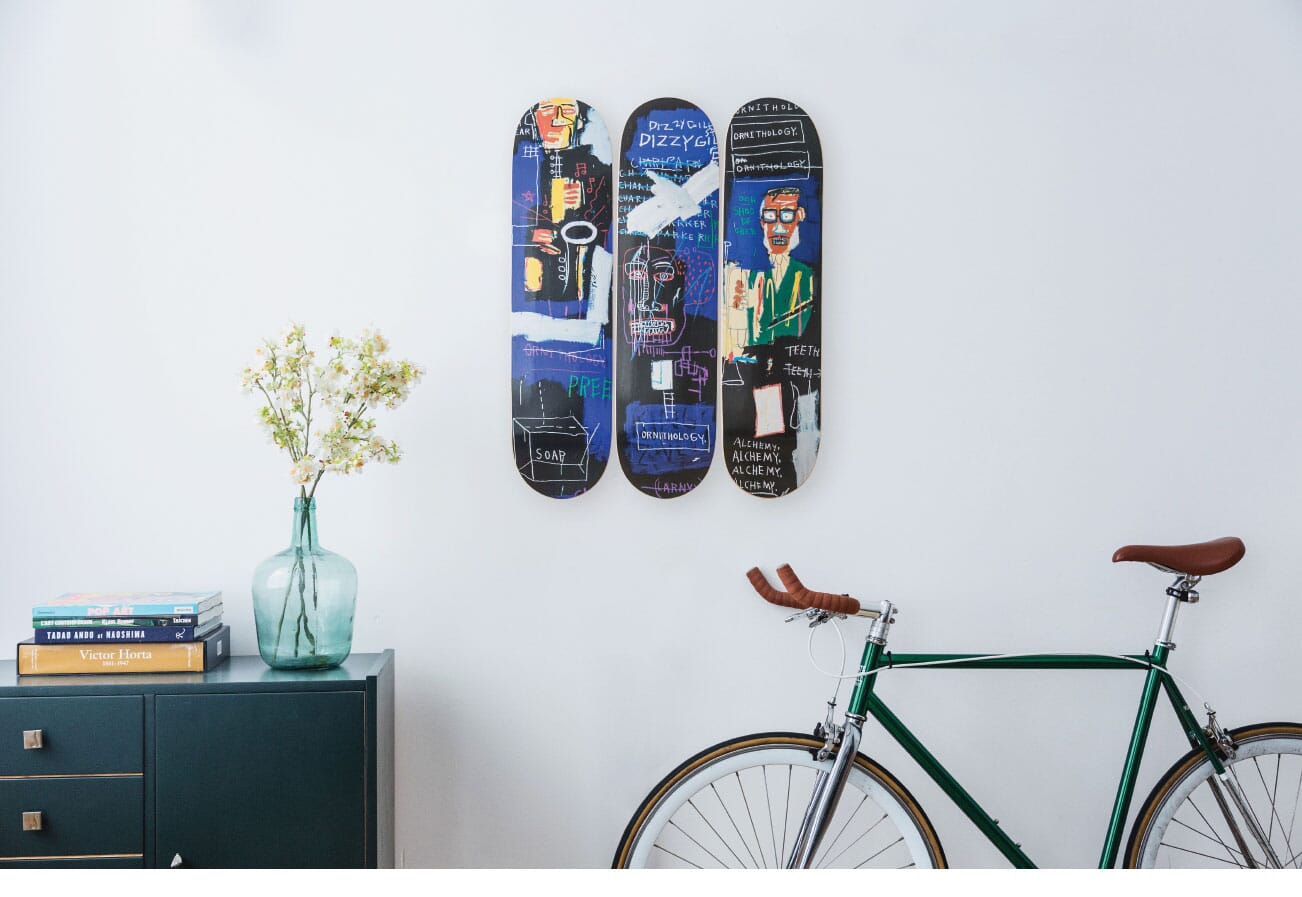 The legend of Basquiat lives on with the latest collaborative effort with the Estate of the late Jean-Michel Basquiat. As a result of their ambitious endeavours, The Skateroom has released its latest project; another incredible series of limited-edition Basquiat skateboards. Three of Basquiat's infamous works Hollywood Africans, Horn Players and Irony of a Negro Policeman have been translated onto triptych skate decks. In doing so, The Skateroom successfully ties together four complementary entities; collectable art, the work of a legendary artist, the zeitgeist of street culture and the power of a social entrepreneurship. As each deck, design and artist that The Skateroom produces not only brings together different artistic mediums and scenes, but it also offers valuable support to projects around the world with proceeds from every collaboration going to Skateistan.

Take a closer look at the brand new Basquiat skateboards below and go ahead and explore the entire The Skateroom collection - featuring the works of Andy Warhol, Steven Harrington, Roger Ballen - at OPUMO. 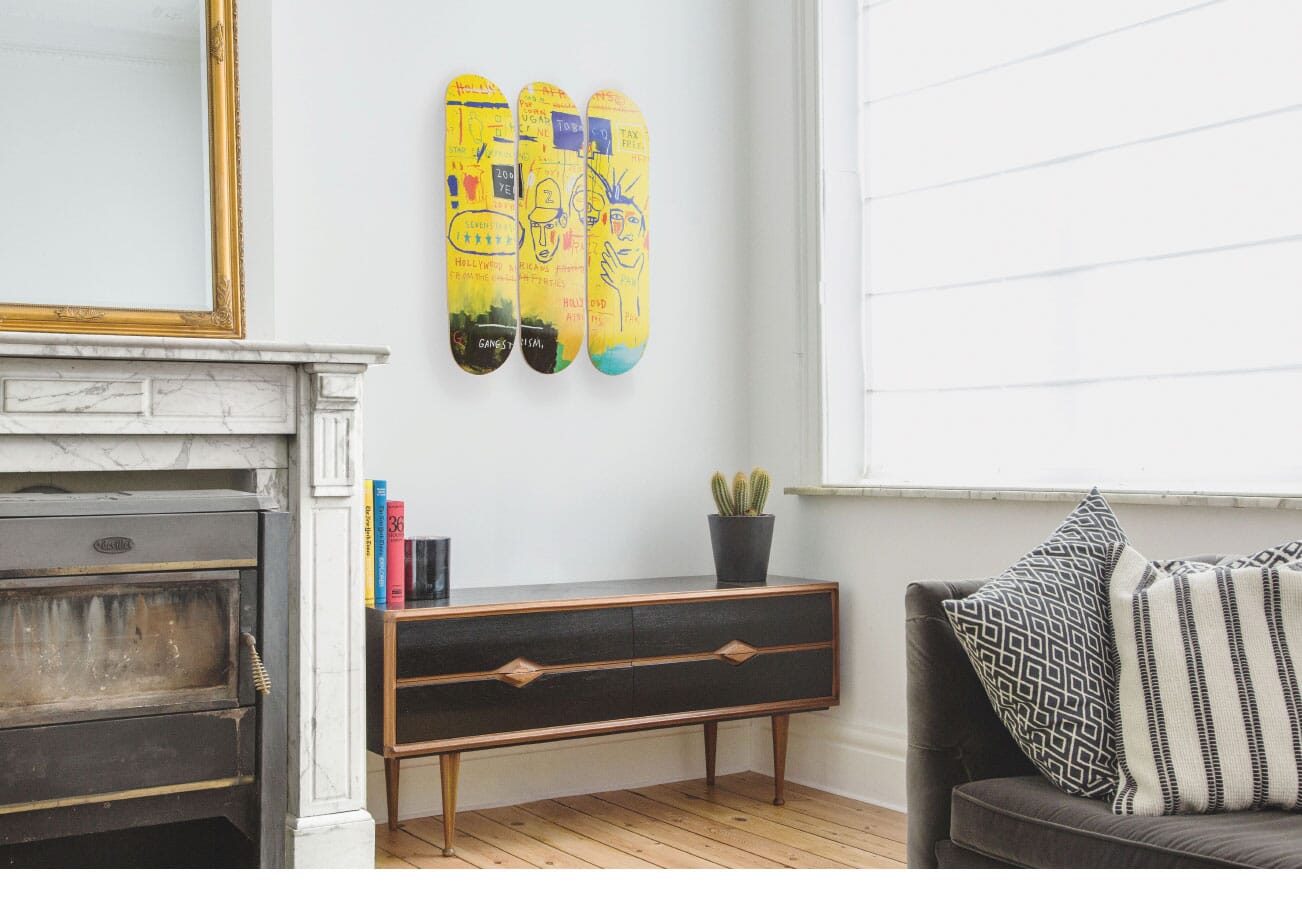 The Skateroom Irony of a Negro Policeman

With hints of Cy Twombly’s famous scribbles, this is our favourite of the bunch. Let this one breathe on a plain wall for and take in the work's poignant and symbolic message. 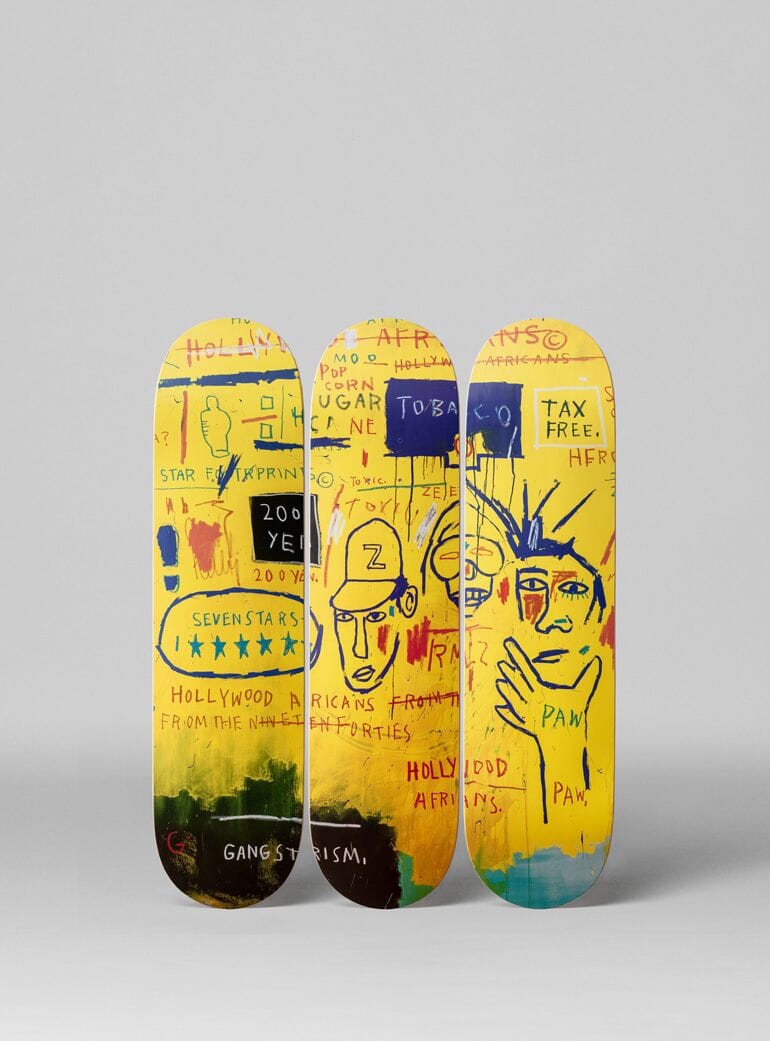 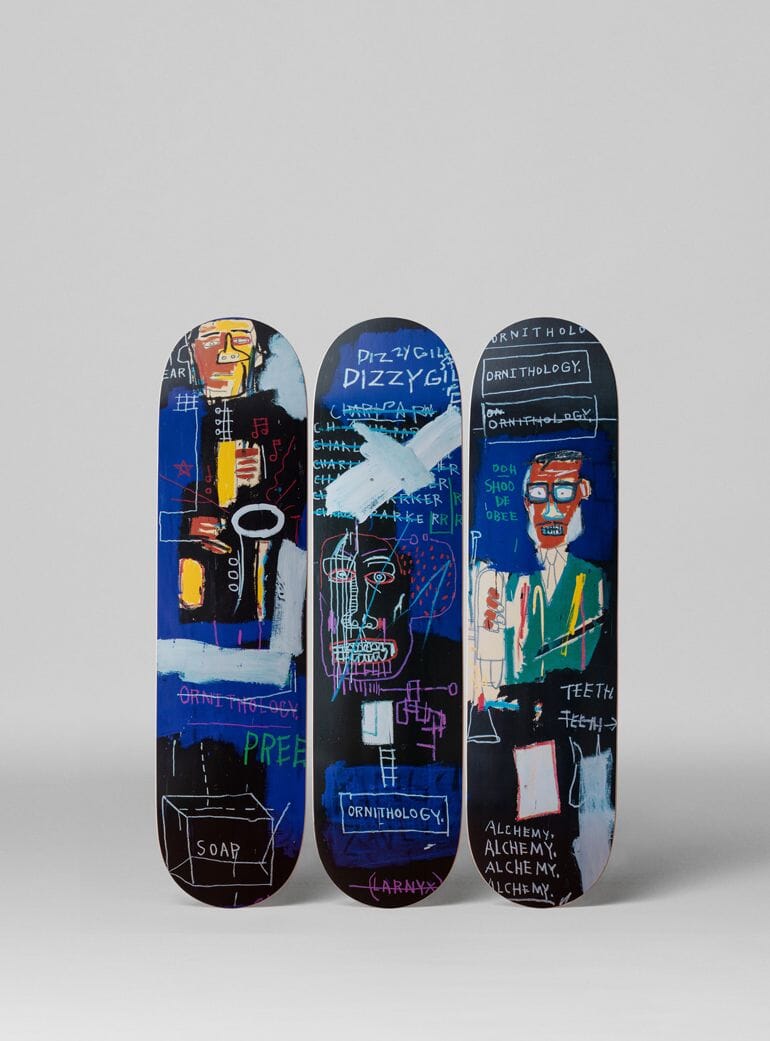 Basquiat’s 1983 work Hollywood Africans is a vibrant piece that’s perfect if you’re looking for a dash of colour for a wall. Featuring Basquiat’s instantly recognisable doodles, this skate deck offers some of the finest colours and characters created by the man behind some of the best world-shaking art.

Exchanging the bright yellow background for a darker hue, but still providing bursts of striking colour, Horn Players is ideal for a room with darker walls. 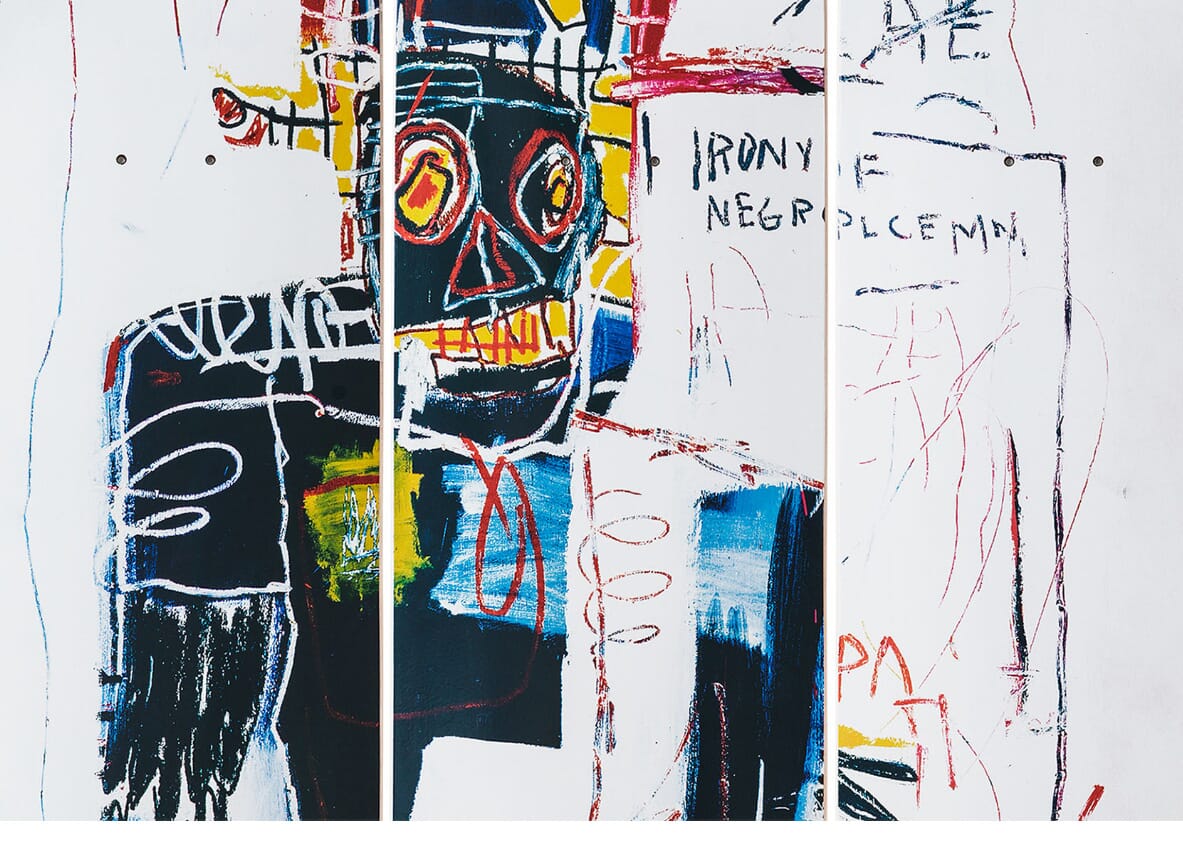 Shop and explore the entire The Skateroom collection at OPUMO.

Looking for more art for your home? Then check out some of the most Instagrammable prints from The Poster Club.