The ultimate guide to men's shoes 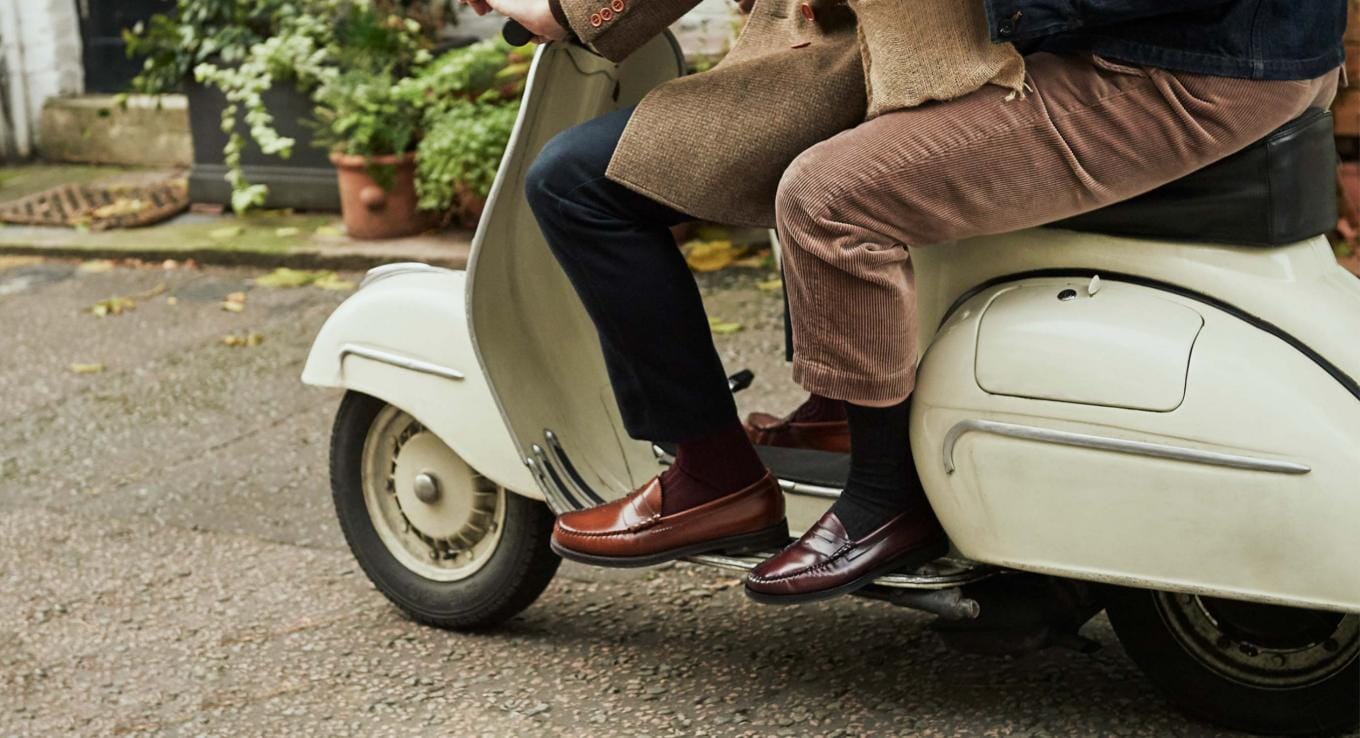 The true power of shoes rests in leather. While men’s trainers can help an outfit, nothing can transform your look like a freshly polished pair of men’s leather shoes. Our lives are almost unrecognisably different to life a century ago. That said, most of the following styles have remained unchanged during that time. That goes to show that although they may no longer fulfil their original functions, the styles are truly timeless. Have you ever wondered why we call Derby shoes Derby shoes? Never questioned the slot design on your penny loafers? Keep reading for a rundown of everything you need to know about Derby shoes, Oxford shoes, suede shoes, loafers, monk strap shoes, brogues and espadrilles. If trainers are more your thing, be sure to check out our ultimate guide to men's trainers. 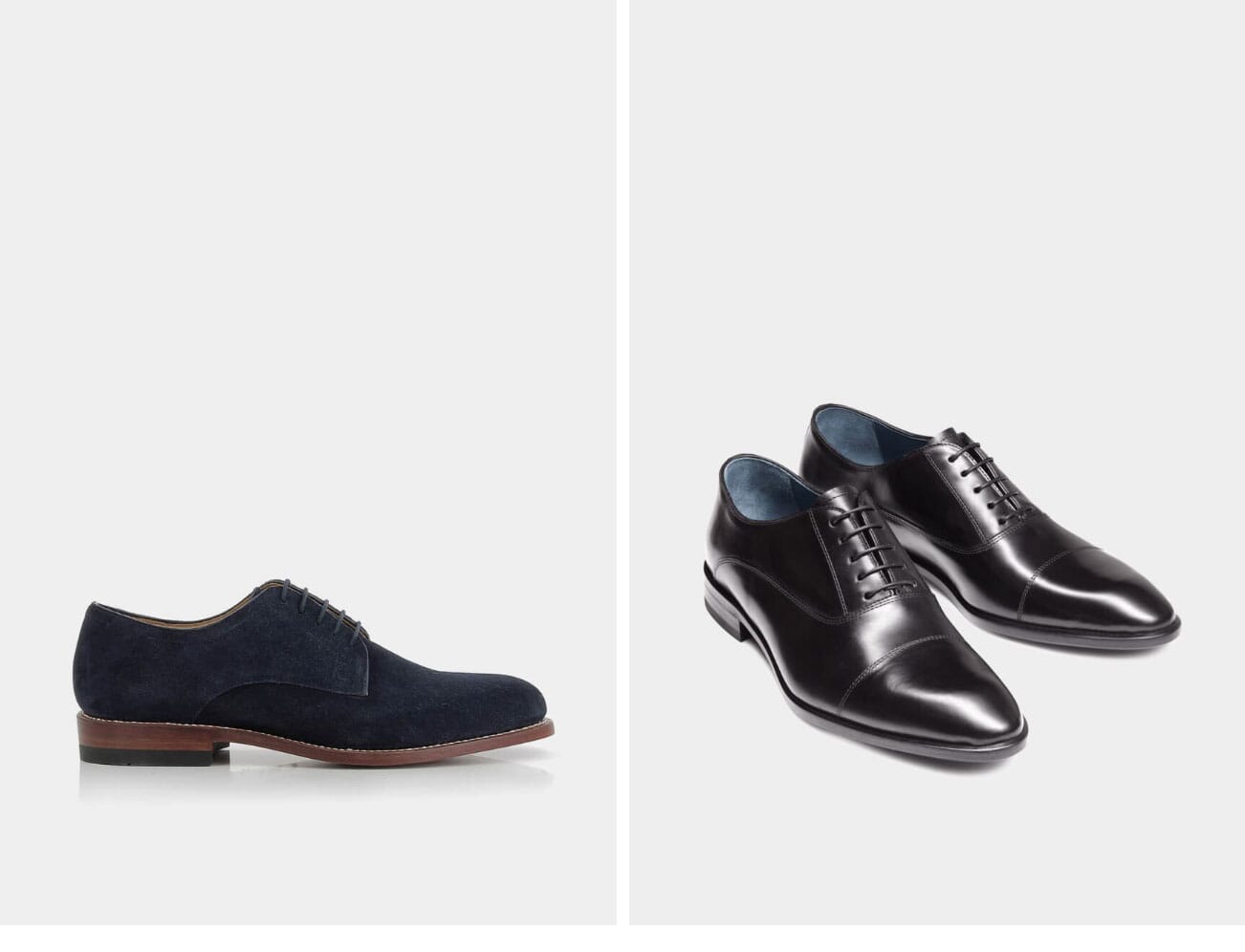 To the untrained eye, men’s lace-up leather shoes can all look very similar but it’s not the case. Each style has its time and place – though these rules are becoming less and less apparent. So let’s begin with the question: what is a Derby shoe? It’s a leather shoe for men that features quarters with shoelace eyelets sewn on top of the vamp. Derby shoes entered everyday wear in the early 1900s. The style was originally used as a sporting and hunting shoe in the 1850s. As promised, in case you were wondering why it’s called a Derby shoe, it’s said that the 14th Earl of Derby had abnormally wide feet which called for his cobbler to design an open-laced boot to help him put on and take off his shoes. In 2020, the style is a certified all-rounder. Casual shoes, like a brown suede Derby, can be worn with denim and a T-shirt while leather Derby shoes with a suit is a common occurrence.

When it comes to men’s leather shoes of any kind, G.H. Bass & Co. is a safe place to begin your search. Not only do we credit the brand with the invention of the leather penny loafer, you’ll find a solid selection of men’s Derby shoes as well. G.H. Bass & Co. offer men’s suede Derby shoes as well as classic leather Derby shoes, all of which feature natural leather midsoles for an authentic, traditional finish. Worn as easily with a suit as a pair of chinos, the Derby shoe is the key to business-casual dressing – read our guide to business-casual. 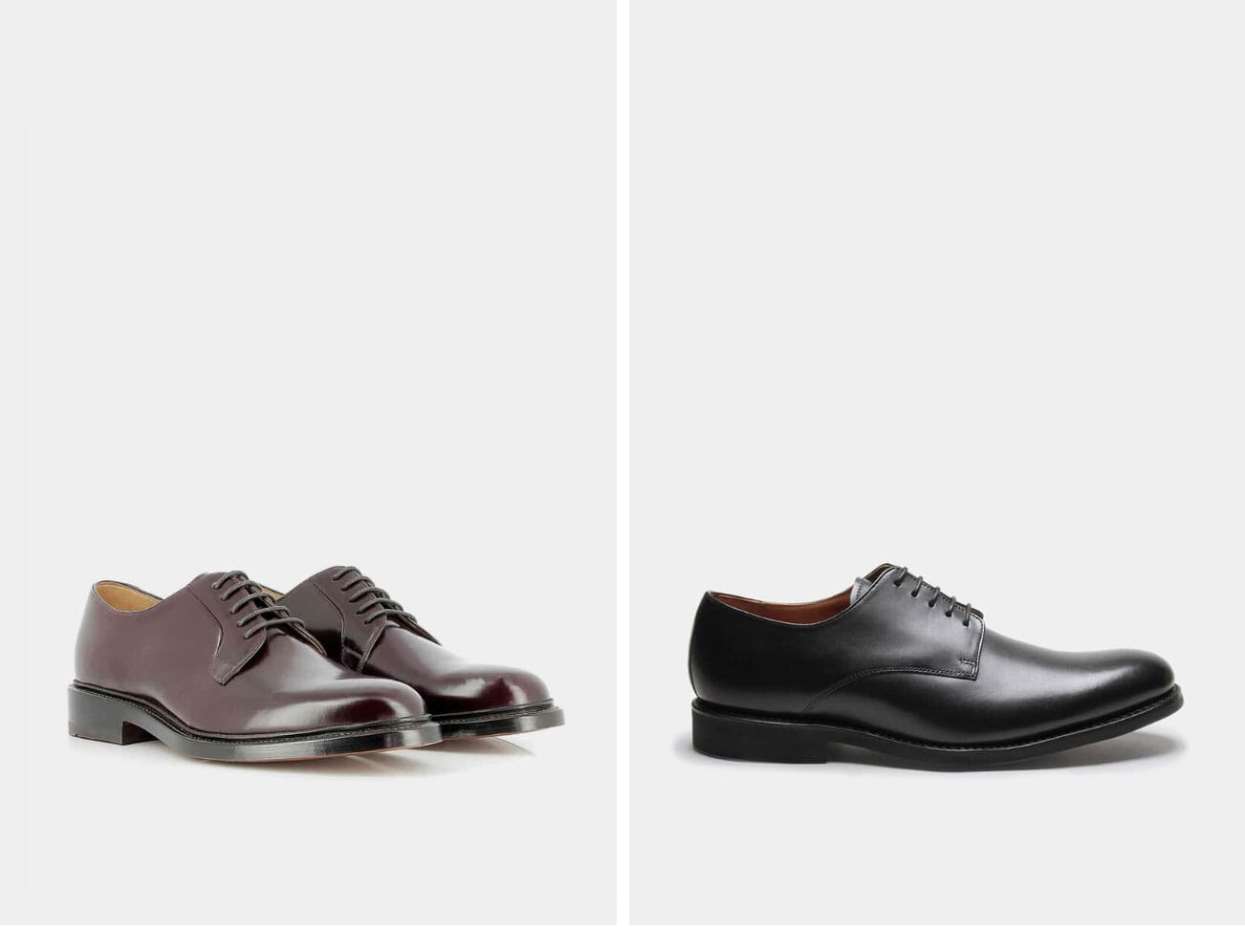 The first question that everybody asks: what is the difference between Oxford shoes and Derby shoes? The principal difference is that men’s Oxford shoes feature a ‘closed lacing’ system. This means that instead of running parallel, the lines of eyelets meet at the vamp and part towards the top. The streamlined low-cut silhouette gained popularity at Oxford University during the 19th century as a rebellion against ankle-high boots. The quintessential dress shoe, leather and suede Oxfords should be your footwear when wearing a suit or tailored trousers.

With an age of experience behind it, Grenson is consistently building on its proud heritage of crafting high-quality leather shoes for men. You won’t be pushed to find men’s black Oxford shoes at Grenson, each pair made from premium leather to exacting standards. 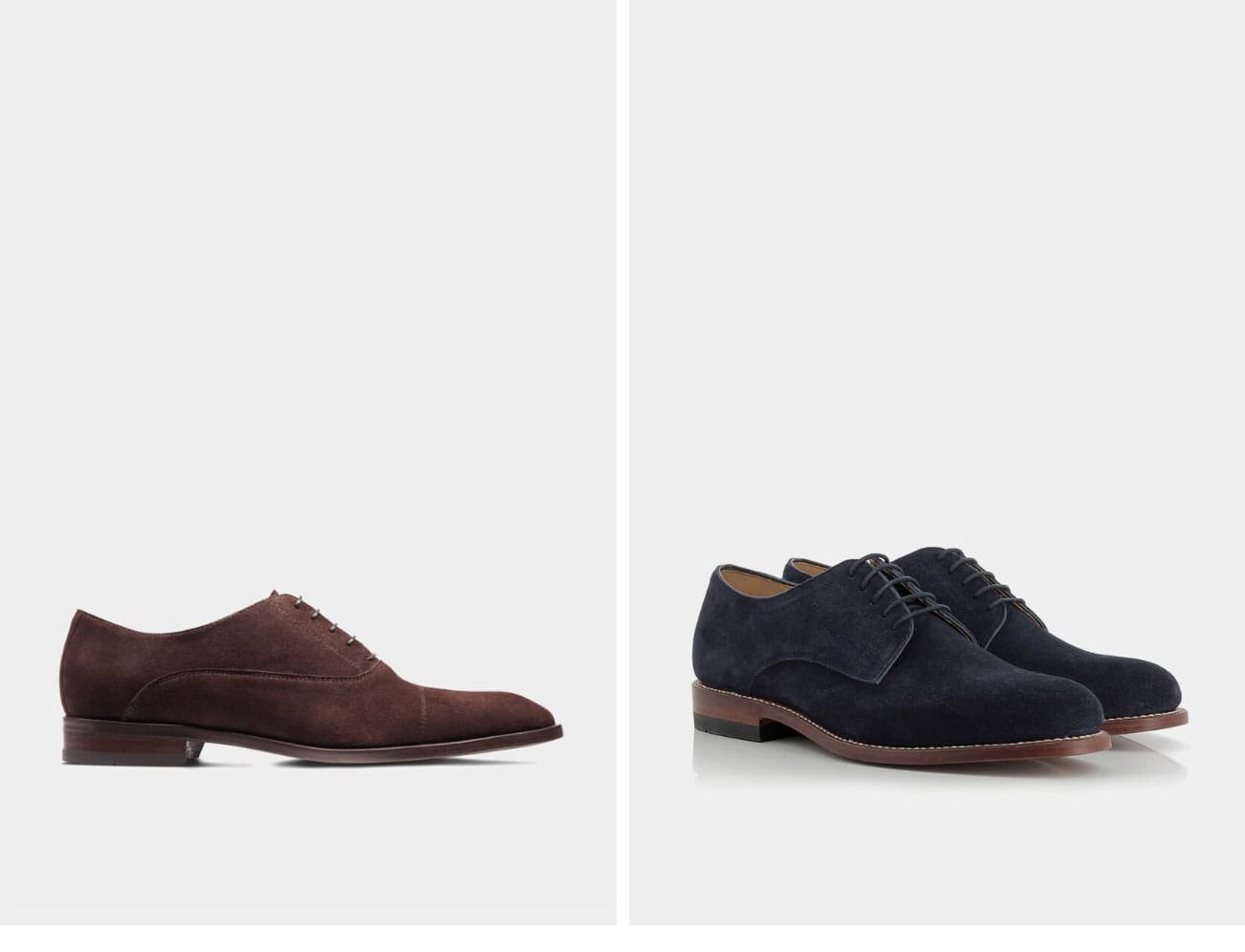 Suede, originally used in Sweden, is the flip side of leather and has some slightly different characteristics. Suede is more pliable than leather which makes men's suede shoes more comfortable than leather in general but the delicate makeup of suede comes with a few obstacles as well. A central consideration is how to protect suede shoes. Along with your shoes, be sure to grab a suede shoe brush and some suede shoe cleaner. After a month or so you’ll be an expert when it comes to suede shoe care. Suede is a good alternative to leather as it gives you the best of both worlds. A sharp silhouette works well with tailoring but the matte suede isn't as formal as polished leather.

Although Sons of London was founded only a few years ago, you’d be forgiven for thinking that the classic leather footwear had been produced by a brand with decades of experience. Sons of London’s new collection encompasses every side of suede footwear. You’ll find premium suede loafers, suede Chelsea boots, suede chukka boots and suede derby shoes too. 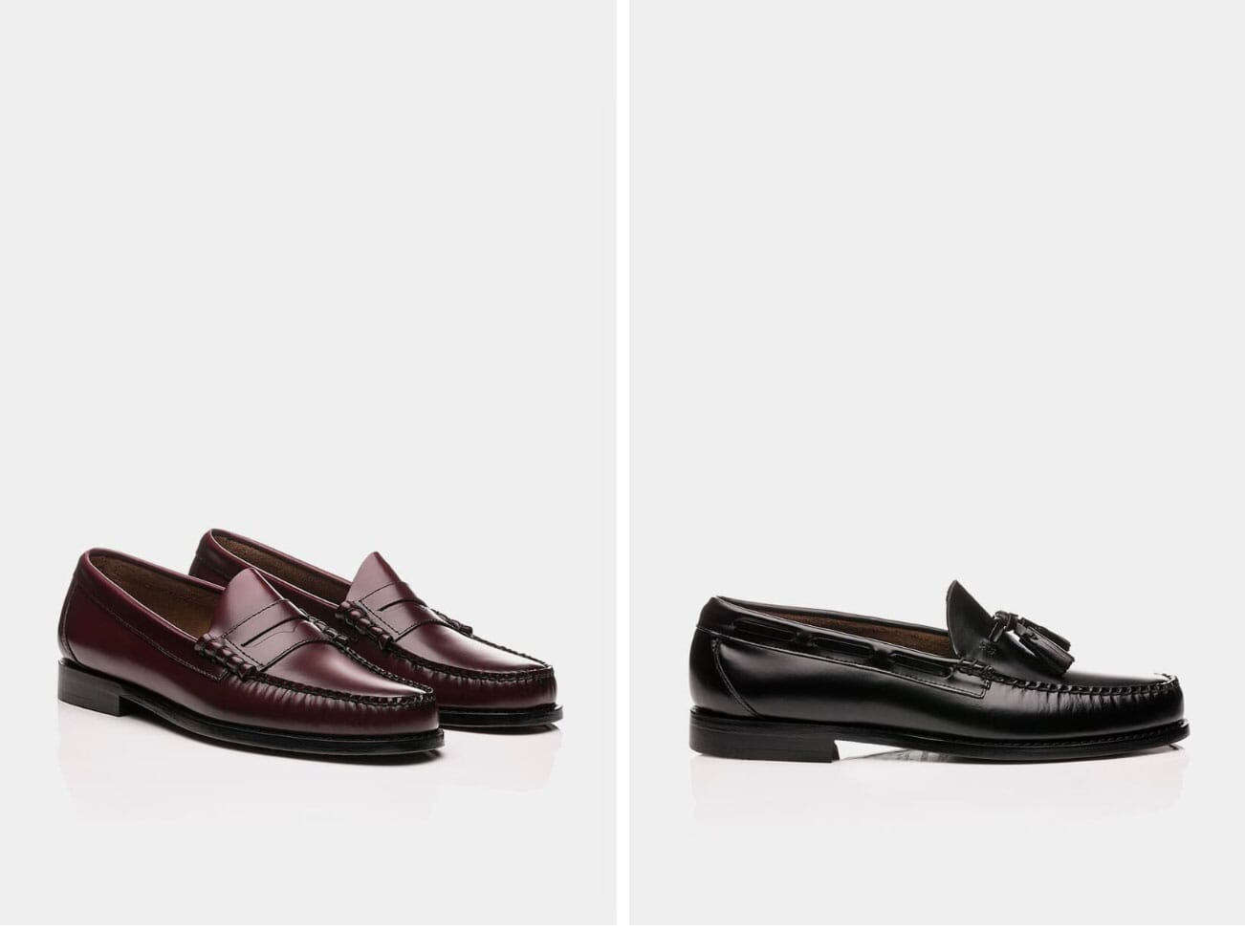 Believe it or not, the modern day men's loafer can be traced back to Norwegian fisherman. During the 1930s, locals noticed the interest of European travellers. They began to export the style to the rest of Europe. Once the popularity of the style began to grown in mainland Europe, shoe companies started to produce loafers on a larger scale using finer materials. We credit the first penny loafer to the iconic G.H. Bass & Co. who produced the Bass Weejun in 1936. The penny loafer is the most common type of men’s loafer, though tassel loafers offer a little more flair. Penny loafers gained the name thanks to the leather strip that runs across the shoe’s vamp, featuring a cut-out slot which would hold a single coin used to pay shoe polishers.

The search for men’s loafers should always begin at G.H. Bass & Co. who offer casual men’s loafers, suede loafers, horse bit loafers, tassel loafers and all loafers in between – see how to style loafers. A recipe tried and tested by time, you’ll be able to style your Bass loafers with a suit as easily as with jeans. 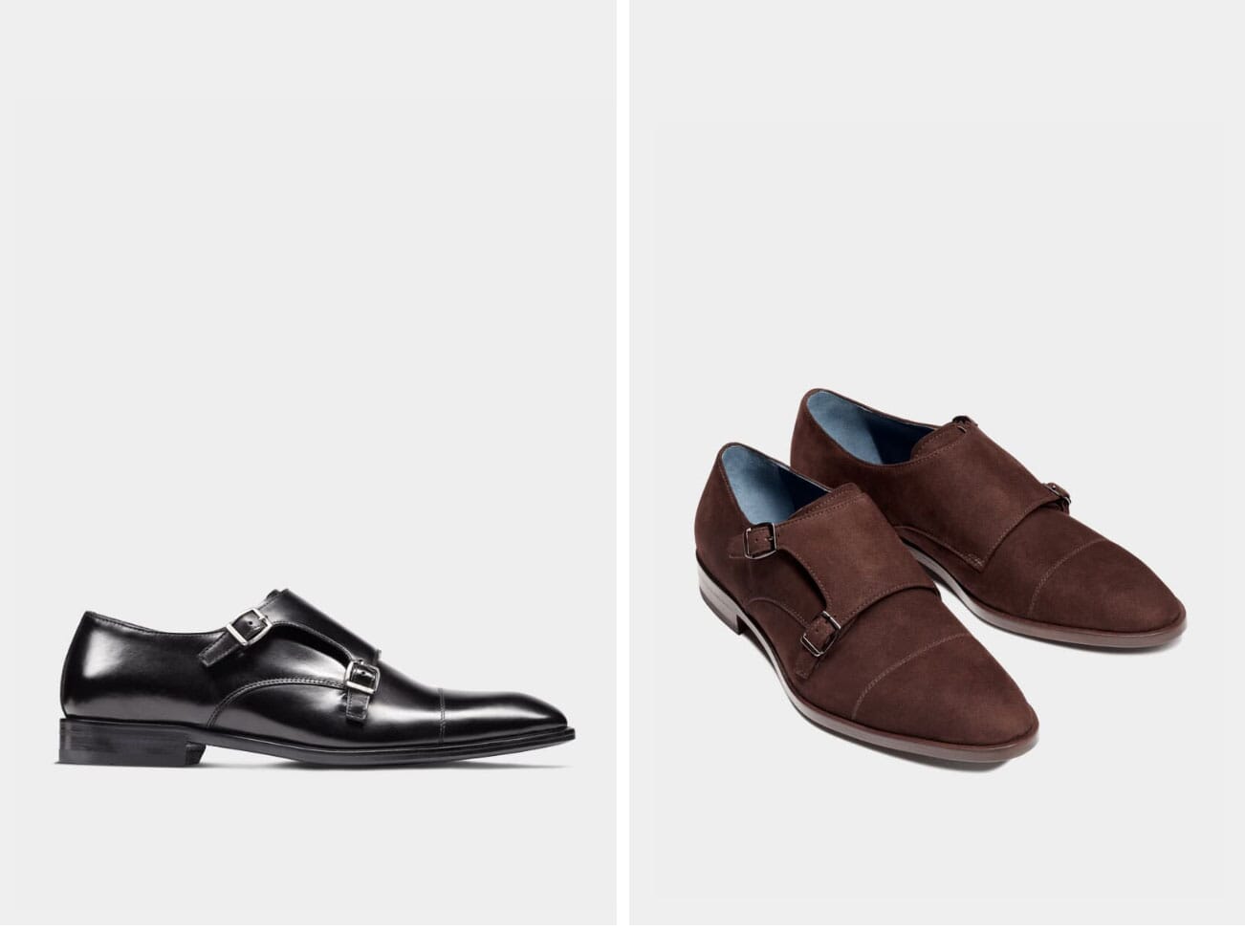 Little happened in the life of a 15th century European monk. When they weren’t worshipping, they were labouring in the fields or the hills – tending to their crops to sustain their villages. Plowing fields was not such a problem in terms of footwear, monks could wear their classic two-buckle sandals, but the terrain higher in the hills and mountains called for something more substantial. Monks began to wear a closed-toe shoe that still featured the buckle fastening of the sandals. Since then, men’s monk strap shoes have climbed the style ladder and are now considered a formal leather shoe. It’s very easy to style monk strap shoes with a suit, just make sure they’re freshly polished. Alternatively, opt for suede monk strap shoes for a more casual look.

Son’s of London's new collection provides all that you might need in the world of men’s monk strap shoes. The double-buckle shoes come in premium suede or fine Italian leather that is suitable for smart-casual wear or more formal situations. Read our Son's of London size guide to make sure you get your perfect pair. 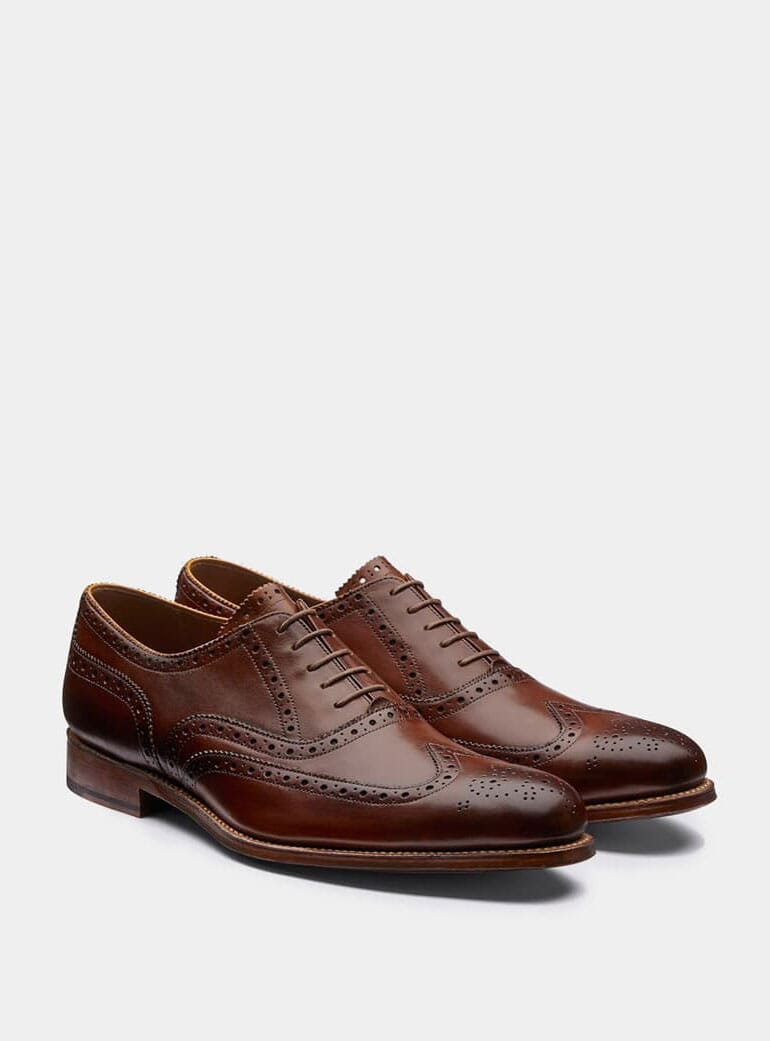 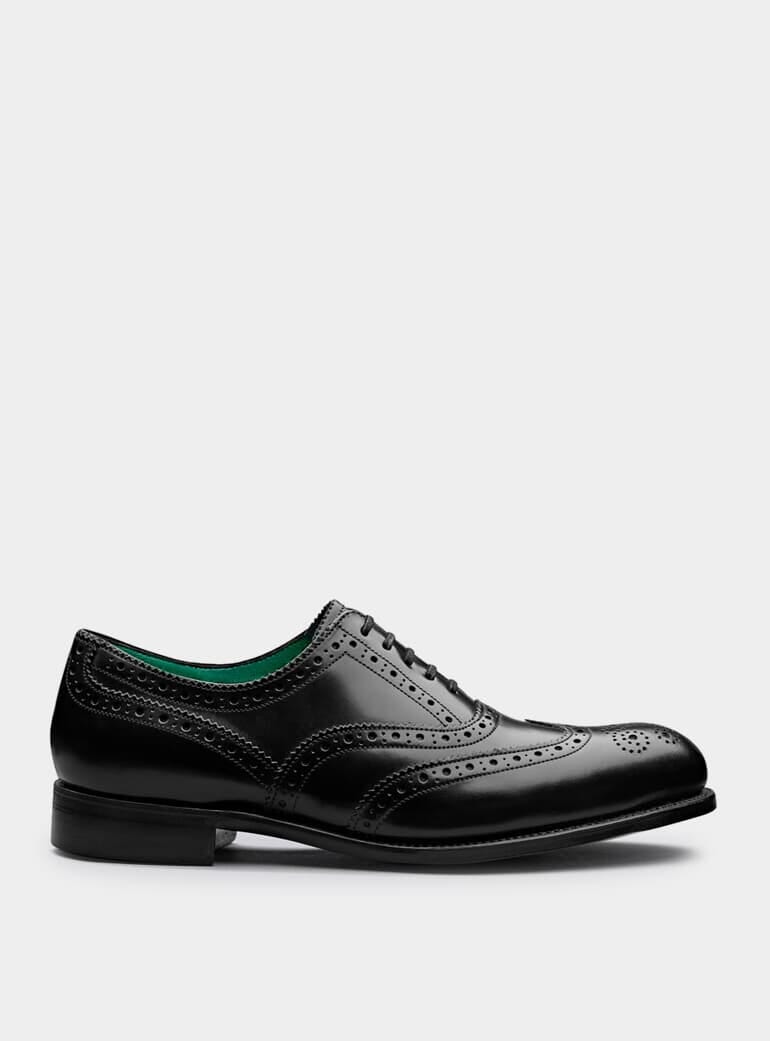 The brogue was originally invented for outdoor use and was commonly worn when hunting. Men’s brogues are characterised by small perforations – called broguing – along the edges of the shoe’s panels which traditionally would allow water to drain from the shoe when walking in the countryside. Brogues are now seen as everyday footwear and the best men’s brogues can be worn in formal outfits. The leather upper construction is well suited to wear with suits as well as casually with chinos.

We suggest leaving the intricate perforation of men’s leather brogues to the masters, so we recommend a flick through Grenson’s catalogue. The heritage brand offers a selection of men’s casual brogues and suede brogues that vary in formality. Ensure that your shoe rack is as versatile as possible. Be sure to read our Grenson size guide first. 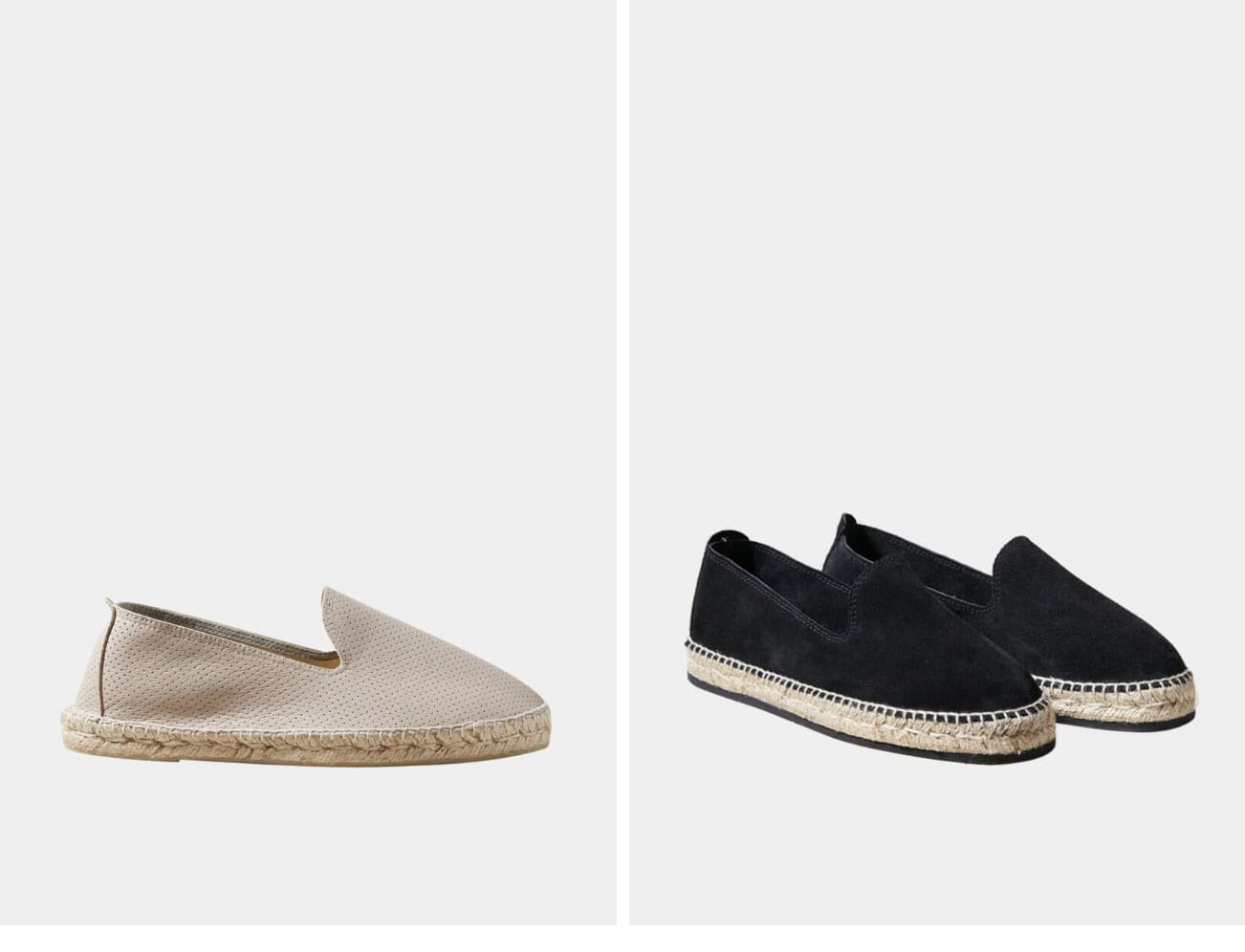 Originating in Basque culture, the espadrille was a simple canvas sandal that could be worn by everyone. The espadrille is now one of the most popular summer footwear options but has barely changed in over a century. Espadrilles for men are now more durable and usually have a rubber outsole to cope with rough terrain and ensure long-lasting comfort.

Shop all men's shoes at OPUMO.

Be sure to check out our ultimate guide on men's trainers.